…” The Portuguese people are essentially cosmopolitan. Never a real Portuguese was Portuguese: he was always everything…”
Fernando Pessoa- Poet 1888-1935 / Portugal
Discover some curiosities you will only find in Portugal.
Laugh, Be surprised, get interested, and get to know us a little better. 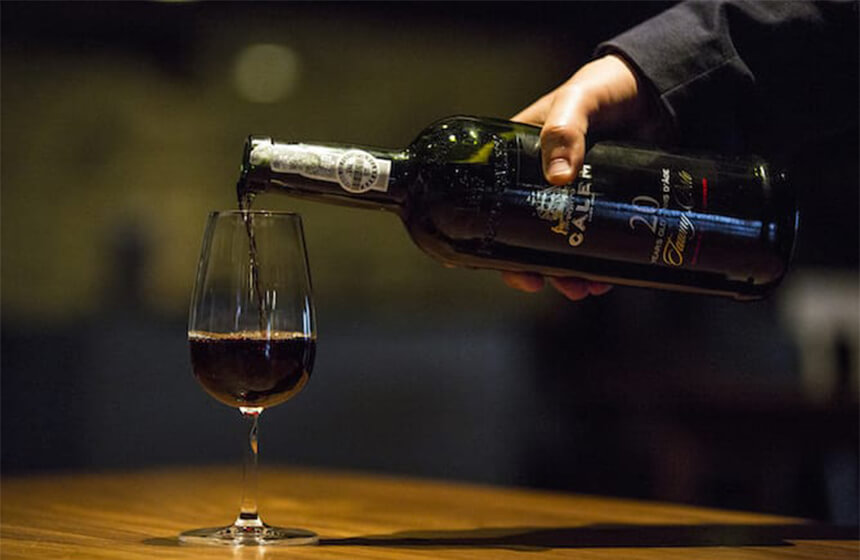 Produced entirely with Portuguese grapes, it is part of the oldest demarcated region in the world, since the 18th century, being at the table of kings, presidents all over the world. Great deeds of nations were celebrated with this nectar. Produced in the Douro river valley in the interior of the country, it became known as Port wine because it was stored in Vila Nova de Gaia - Porto, and from there, was exported all over the world. The city of Porto, the 2nd most important in the country after Lisbon, is considered the Ex libris of the North, the Portuguese Bruges with its granite monuments In Portuguese Baroque style, on the banks of the Douro River, very close to the Ocean. 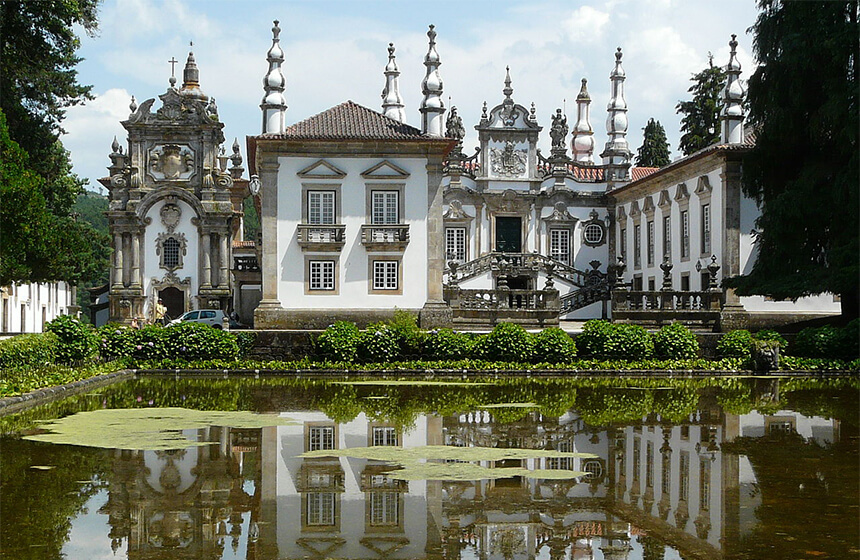 The Baroque of King João V

Different artistic currents coexisted in Portugal during the reign of King João V, 18th C. in which the kind of Baroque called in portuguese (Joanino) had great merit in opening up to the influences of international currents, mixing them with the artistic tradition of national workshops and producing some of the most emblematic Portuguese works of art.The city of Porto, among others, is known for its works in this very Portuguese style and for its granite monuments, works by the Italian architect Nicolau Nasoni, such as the Torre dos Clérigos, Paço Episcopal or the Casa Mateus at Vila Real. 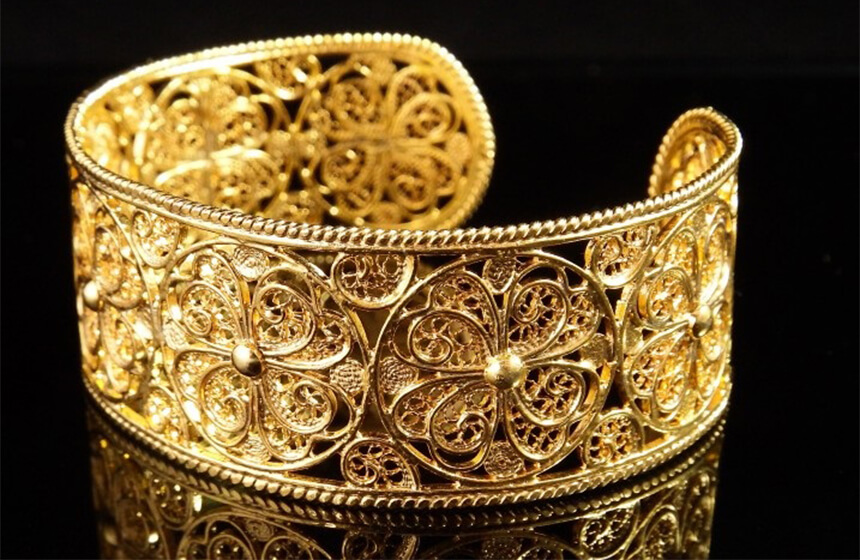 Ornamental jewelry, work made of very fine threads that can be gold, silver or gilded silver and tiny metal balls welded together to form a design.
Filigree has been used in jewelry since Greco-Roman antiquity, although in Portugal there is a tendency to consider it as prior to the Greco-Roman civilization, taking it back to the time of the Celts. Therefore, it is still used in a wide variety of decorative objects.
Currently, the filigree pieces can be found with enormous visibility in the North of Portugal, often used in the set of the traditional wedding dress and also in the female costume of folklore groups in Minho. Skilled goldsmiths of this fabulous art can be found particularly in the North of the country, where workshops of their manufacture can be visited. 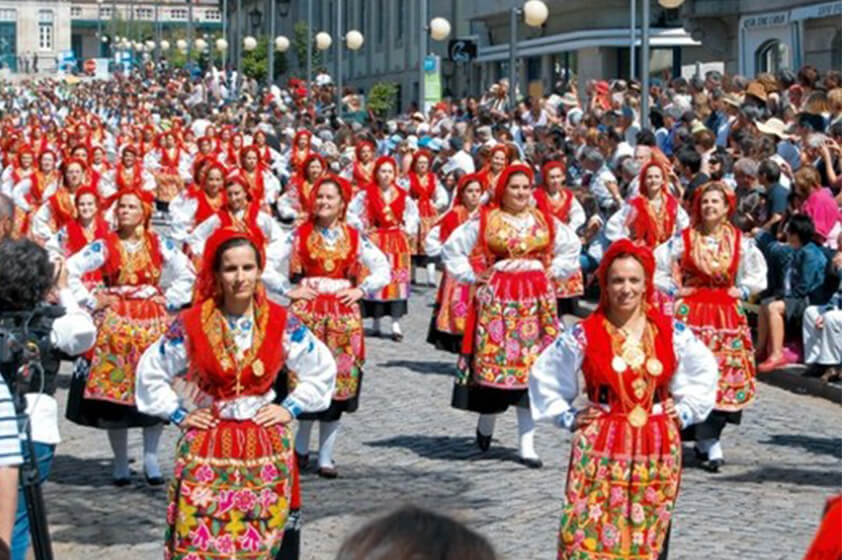 They are undoubtedly a typical feature of popular and traditional culture in Portugal. They happen all over the country, particularly in the summer months and are part of the people's memories and traditions. A large part of Portuguese emigrants around the world, visit their villages and towns from where they left, at the time of these festivities that can be a real feast from a gastronomic point of view, full of music, dances and popular conviviality. The ones of Senhor da Agonia are famous in Viana do Castelo, Nossa Senhora do Cabo Espichel, in the beautiful Serra da Arrábida on south of Lisbon, among others.

Piece of crafts and clothing typical of Minho, a beautiful region in the northwest of the country, being used by women of marriageable age, originally embroidered by them, containing verses and various love designs such as hearts, flowers and doves. Many of them had spelling errors, as their executors didn't know how to write very well. Nowadays, they can be found on the best craft stores at very high prices, considered as a high quality craft piece. 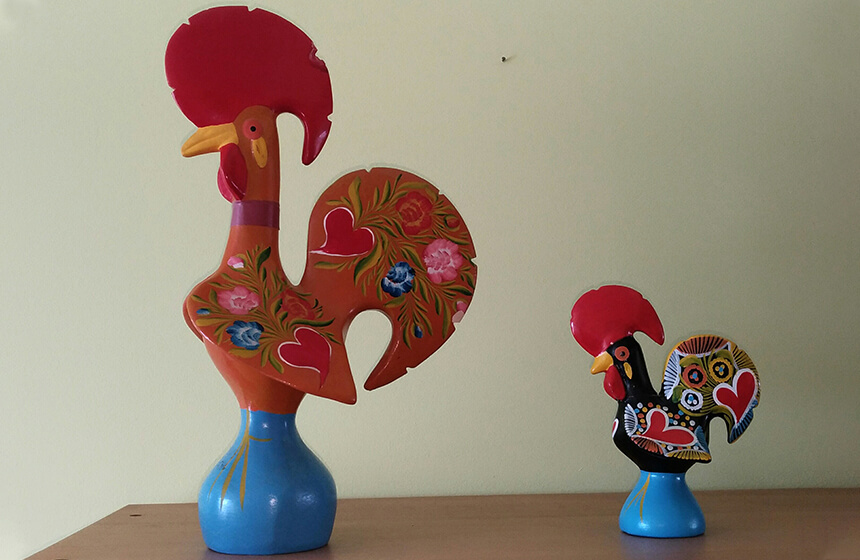 The rooster of Barcelos

The legend of the Rooster of Barcelos, narrates the miraculous intervention of a rooster in the proof of innocence of a man accused of robbery, an event that took place in the middle ages. The rooster of Barcelos is today an icon throughout the country, considered by many as the symbol of Portugal, being a form of handicraft acquired throughout the country but mainly in the city of Barcelos in the Province of Minho, where the most interesting shops and popular ceramic ateliers are located. Every self-respecting Portuguese has a rooster from Barcelos at home.

Masked and colorful character from the Trás-os-Montes and Alto Douro Carnival. It is a man who wears a mask with a protruding nose made of leather, brass or wood painted in bright colors of yellow, red or black .The tradition of the Caretos is thought to have Celtic roots from a pre-Roman period. They entertained themselves by scaring village girls and stealing kisses. 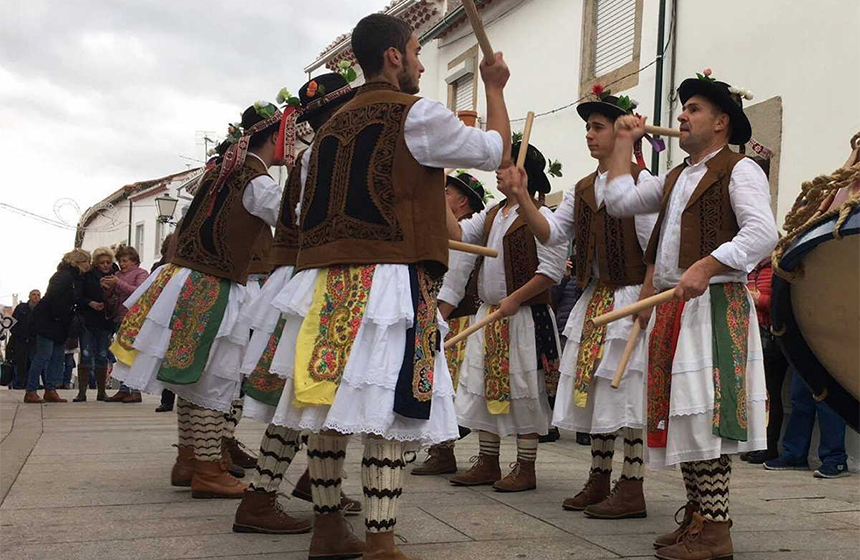 Warrior dance characteristic of Terras de Miranda, (inland the country close to the “Raia”, border with Spain), accompanied by the sounds of bagpipes and other instruments.
Danced only by men, (8) wearing an embroidered skirt and linen shirt, brown vest, leather boots, wool socks and hat decorated with flowers and 2 sticks with which they make a series of different steps and coordinated movements. The language Mirandês is spoken here, this language is spoken by approximately 7000 to 10 000 people in the far northeast of Portugal, since 1999 it has been the country's second official language. Originally Asturias-Leon with Celtic and Latin influences.

The Portuguese Azulejo is one of the most distinct brands of Portuguese culture. To talk about the history of the Portuguese tile, we have to refer to its origins. The Muslim influence in ornamental decoration, had a strong impact on Portuguese tile culture. Initially mixed with the decorative motifs of artists from Seville, it became individualized over the centuries. The brilliance, exuberance and fantasy of ornamental motifs, arrived from the Far East. From China, the porcelain blue arrived, which, in the second half of the 17th century, gave the tile compositions without repetitive character, full of dynamism and shapes in movement. During the reign of King João V (1706-1750), the tiles were influenced by the guilt woodwork, using the same motifs in a tendency for the entire wall surfaces to be covered, creating a characteristic baroque impact. During this period, Portuguese tile is widely used in churches, palaces and houses, belonging to nobles and bourgeoisie, inside and outside, in its gardens. It was considered a mean of social distinction. The tile has 500 years of national production. 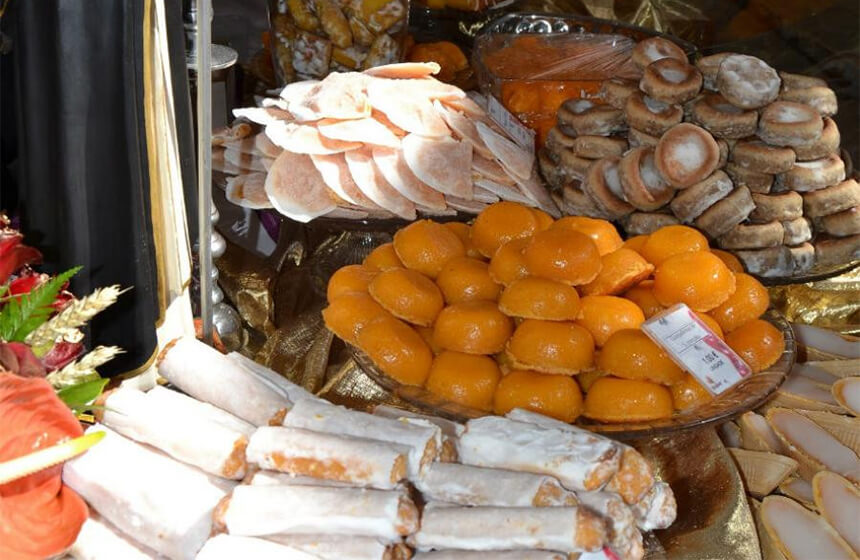 The origins of Portuguese convent sweets date back to the 15th century. Sugar entered the gastronomic tradition of convents and the list of sweets is extensive and covers all regions of Portugal. Often, when we go into a Patisserie to drink coffee and eat a cake, we are eating a convent sweet.

Where the most famous are:

At the beginning of the 19th century, in Belém, next to St. Jerome’s Monastery, there was a sugar cane refinery associated with a small place of varied trade. As a result of the Liberal Revolution that took place in 1820, in 1834 all convents and monasteries in Portugal were closed, and the clergy and workers were expelled. In an attempt to survive, someone from the Monastery put some sweet pastries for sale in that store, quickly known as “Pasteis de Belém”(Custard Tarts). In 1837, the production of “Pastéis de Belém” begins, in installations attached to the refinery, according to the old “secret recipe”, from the Monastery. Passed exclusively from pastry master to its successor, who make them by hand, in the “Oficina do Segredo”. ( Secret workshop) This recipe remains the same to this day, attracting people from all over the world to Belém, to taste them.

The Portuguese Gothic, or flamboyant, is a decorative, sculptural architectural style that was developed during the reign of King Manuel I in the 16th century. It is a Portuguese interpretation of late Gothic as well as Luso-Moorish or Mudéjar art. Icons of this type of decoration are St Jeromes’s Monastery, Belém Tower in Lisbon, among others that can be visited in the capital of Portugal on the banks of the beautiful Tagus river. 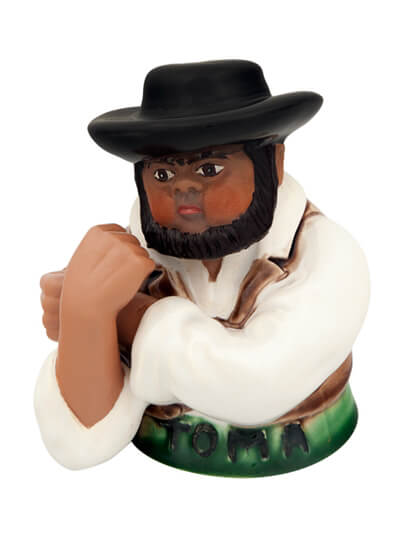 It is a social satirical character, created by Rafael Bordalo Pinheiro a Portuguese artist, with vast work, spread across dozens of books and publications, designer, watercolorist, illustrator, political and social caricaturist, journalist, ceramist and teacher. Its name is closely linked to Portuguese caricature. He is the author of the popular representation of Zé Povinho, which became a symbol of the Portuguese people representing … the Portuguese, man of the people. It will be like Uncle Sam to Americans. Rafael Bordalo Pinheiro's ceramic work has become internationally known, and the factory is visited throughout the year by tourists in the beautiful city of Caldas da Rainha, near Óbidos.

Arraiolos rugs are rugs embroidered with wool on a jute or cotton canvas, traditional in the village of Arraiolos, in Portugal. The oldest references to the technique of making rugs by Arraiolos date from the end of the 15th century. The Portuguese hand-embroidered Tapestry, named Arraiolos, only officially dates from the beginning of the 17th century, but it is possible to assume that it was practiced much earlier, since the oblique cross stitch (currently known worldwide as a stitch de Arraiolos) has also been practiced in the Iberian Peninsula since the 12th century. They are carried out to this day in Arraiolos in Alto Alentejo, one of the most beautiful areas in the south of Lisbon. 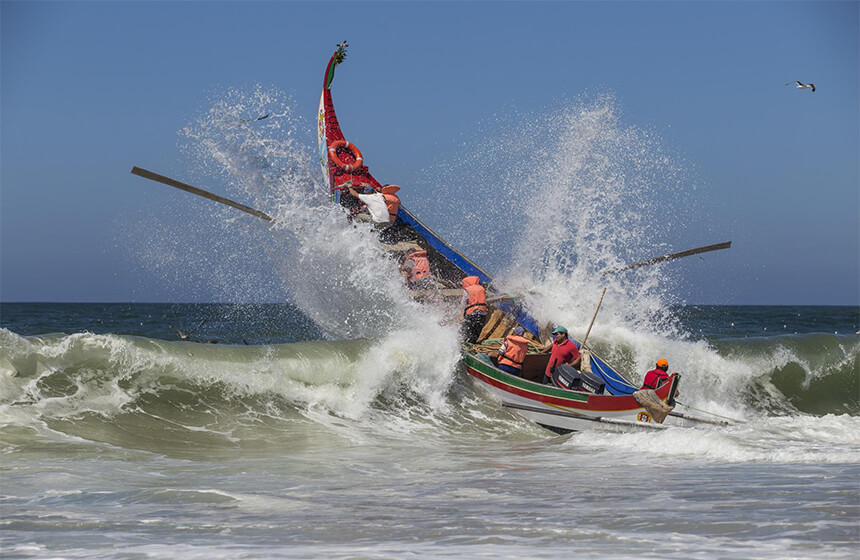 Artisanal fishing, made with a seine net and its equipment consists of a cable, floats and a bag in a conical shape. In the past, the capture was done with the help of oxen and is only practiced in Portugal between Espinho (near the city of Porto) and Costa de Caparica, south of the Capital. The word Xávega comes from the Arabic etymon Xábaka, which means network. The Art Xávega is a tradition that is disappearing from our coasts although on some beaches like Nazaré recreations are made for tourists. It is also still practiced in certain areas of the Algarve, south of the country. 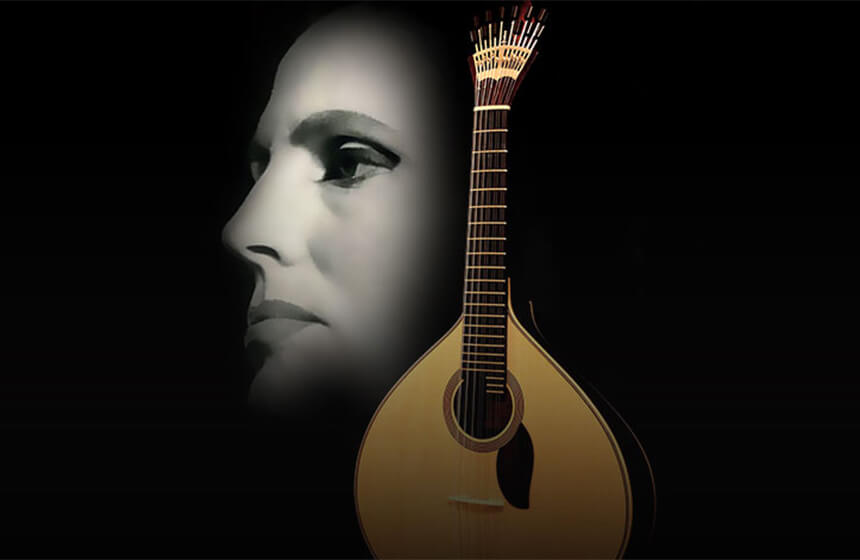 Fado is a very well-known musical genre in Portugal. Usually only one Fado singer sings it, to the sound of the classical and Portuguese guitars. This expression that gives it its name comes from the latin word 'Fatum', which can be translated as 'destiny'.
There are several theories about the origin of Lisbon's typical Fado: Some find their roots in the chants of the Moors who, even after the Christian regain of the territory, continued to live in the Mouraria and Bairro Alto neighborhoods in Lisbon. Others, claim, that it may have originated on the songs of the troubadours from the south of France, the inherent nostalgia for sailors or the Lundu chant practiced by slaves taken from Africa to Brazil. Its main characteristics, such as deep and lasting sadness, would be a heritage of this culture allied to the word Saudade, which is only found in the Portuguese language and which defines the absence of someone or something. The Fado only became known in the 19th century onwards. In its beginnings, Fado was composed of very popular lyrics and melodies, in regions such as Porto and Lisbon. Gradually this genre developed, it acquired greater consistency and adapted to new times, until reaching universality. Since 2011, it has been considered an Intangible Heritage of Humanity by Unesco. The best known Fado singer of recent times was Amália Rodrigues, already deceased. It can be heard in several Fado Houses across the country, but especially in Lisbon.

Back to top
We use cookies to ensure that we provide you with the best experience on our website. If you continue to use this page we assume that you agree to use. To know more information about our Cookies Policy, click here.